Aktiv Baby
- for you and your baby

Feel good during the pregnancy and create optimal conditions for a fantastic childbirth!

What is Aktiv Baby?

Aktiv Baby are easy and specific exercises that help the baby to choose optimal positions in the uterus, which decreases pregnancy related problems and promotes an easier birth! 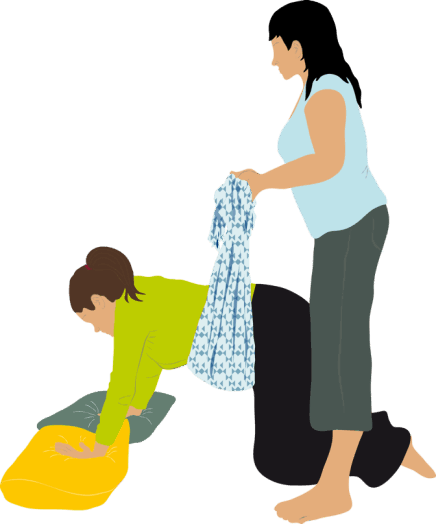 During pregnancy Bellylift is helpful if you experience:

-baby having ”too little space”,

-uterus hanging forward too much

-stabbing pain in legs or vagina

-baby not engaging in pelvis during end of pregnancy.

Do the exercise once a week from pregnancy week 18. From week 37 its okay to do 1-2 daily.

During childbirth Bellylift is helpful if you experience:

Contraindication: do not do if any bleeding during pregnancy

-Put rebozo or wrap around belly, from pubic bone to upper part of the belly.

-Pregnant person stands on all four. It’s nice to lean over a chair or couch with chest, to reduce weight from arms.

-Support person collects the fabric bit by bit in the hands, so the fabric is evenly tight all around the belly.

-Hold the fabric in hands with thumbs up.

-Lift the belly up with the rebozo/wrap, until pregnant person indicated that support person is lifting all the belly’s weight.

Forward leaning inversion, FLI
Why: promotes health in the short ligaments that connect at the back of the uterus and
back of pelvic. 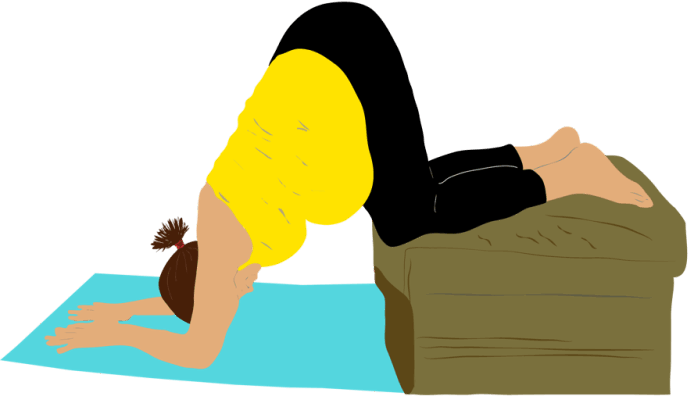 During pregnancy FLI is helpful if you experience:

-Baby is breech or transverse.

-Baby is not engaged in pelvis late in pregnancy.

Do once a week from pregnancy week 28.

If breech or transverse after week 34: ask your Aktiv Baby Instructor for more

During childbirth FLI is helpful if you experience:

-Baby has been breech or transverse after week 34.

-During breech births FLI should always be done.

Contraindication: Do not do if you have heart problems, glaucoma (high pressure in

your eyes), high blood pressure, too much amniotic fluid.

If you have heart burn – wait until it goes away.

-Kneel on a couch, with knees close to the edge.

-Come down with your hand on the floor.

-There should be a straight-line shoulder-

During childbirth stay head down for up

-Come up to a standing kneeling. And

-Sit back on your heels and take a deep

Have a support person next to you the 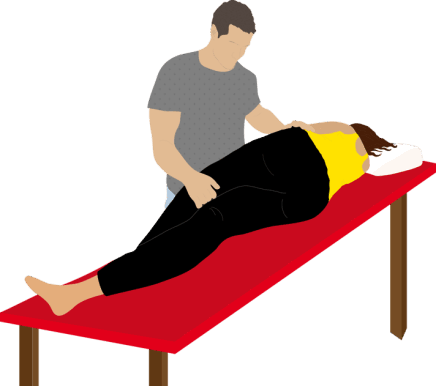 Why? Release tension in muscles in pelvis and
pelvic floor.
During pregnancy SLR is helpful if you
experience:
-diarrhea, constipation
-recurrent urinary tract infections
-pain during sex
-feeling that baby will fall out of vagina
-baby not engaged in pelvis during end of
pregnancy
Do SLR once a week from pregnancy week 18.
Daily from week 37 if baby not engages.

During childbirth SLR is helpful if you experience:

Contraindication: Do not do if any bleeding during pregnancy

-Lay on a couch/bed. If very soft then put an ironing board or similar under hips.

-Lay on your side very close to the edge. Belly needs to hang over the edge. No more

than four finger width between edge of bed/couch and hips.

-It’s nice to have a chair that the pregnant person can hold on to, for a feeling of

other and neck in line with spine.

-Support person holds one hand around upper pelvic bone – at all times! Needs to keep

-Let go of leg and let leg hang. Pull leg a bit towards belly, so the knee gets bent.

-Repeat on other side.

About the creator of Aktiv Baby, Xana De Silva

I did my doula training in 2004 with Susanna Heli. She is the author of ”Confident
birth”. I’m ODIS certified doula and ODIS certified childbirth educator. Odis is
Organisation for doulas and childbirth educators in Sweden. www.doula.nu. I’ve
attended several national doula conferences and also given lectures on Aktiv baby and
other topics. I’ve attended Advanced doula workshops with Ina May Gaskin (2014),
midwife and author of &quot;Spiritual midwifery” and Debra Pascali-Bonaro
(2015), author of "Orgasmic birthing". I’ve attended the following workshops and
trainings: Waterbirth with Dianne Garland (2015), rebozo with Thea van Tuyl (2016),
“Hormonal Physiology of  Childbearing” with Dr Sarah Buckley (2018). I’ve done two
Spinning Babies (2016) trainings with Jennifer Walker. As a doula I’ve given support at
around 100 births. I’ve trained over 120 doulas and a number of childbirth educators,
for ODIS.
In 2005 I became certified parent educator through INCAF (International network for
children and families, USA) och Positive parenting network of Australia. As parent
educator I teach positive parenting classes. I’m in particular interested in children with
special needs, like autism and ADHD.
I became a Breastfeeding consultant through my studies at in Australia (2005) and
Kristianstad högskola (2015). I’ve attended several international (2007, 2008) and
national breastfeeding conferences (2010, 2011, 2012, 2015). I also gave lectures on
childbirths effect on breastfeeding at Amningshjälpens conference in 2011. I’ve worked
with breastfeeding at Lunds Hospital (2008, 2009). I give private consultations to
pregnant and new parents.
In 2010 I went to the USA and did childbirth mentor training through Birthing from Within with Pam England, author of the book “birthing from within”. At the same time I did my prenatal yoga teacher training with Anna Eliasson and Anna Verwaal, according to “the Khalsa way" which has a holistic view of fertility, pregnancy, birth and parenting. In 2015 I also became a mother-baby yoga instructor through BirthYoga.
Nada Ear acupuncture training with Kajsa Landgren (2018) and "Acupressure for pain
relief during childbirth" with Hannah Lind Arlaud (2018).
I’ve studied nursing at Lund’s University and author’s school, also at Lund’s university
(2009-2011).
I speak Swedish, English and German.
I developed Aktiv Baby from my knowledge from Spinning Babies, prenatal yoga,
rebozo technique, anatomy and physiology and other studies and experience. I offer
consultations, workshops and trainings for pregnant persons and health care workers,
both individual and in groups. I live in Skåne and offer private consultations in person
or online. I also travel around Sweden and teach. Contact me for more information!

Disclaimer: Information on this page does not replace medical advice nor medical treatment. If your pregnancy, health or the health of your foetus deviates from the norm please discuss with your midwife or medical doctor before using Aktiv Baby.